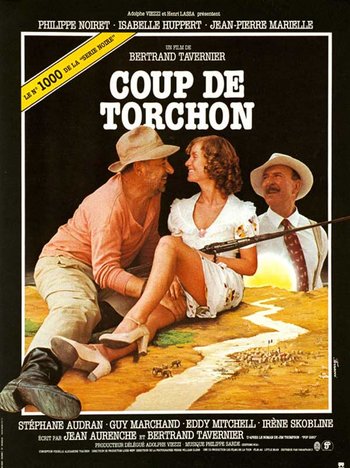 Coup de torchon ("Clean up" or "wipe"), aka Clean Slate is a 1981 film from France directed by Bertrand Tavernier.

It is an adaptation of the Jim Thompson novel Pop. 1280. The setting is French West Africa (now Senegal) in 1938. Lucien Cordier (Philippe Noiret) is the only policeman in a small town. He is regarded as a joke by everyone. His wife Huguette not only insults him and belittles him, she is carrying on an affair with a younger man, Nono, who lives in their home. (She pretends that Nono is her brother, but it isn't very convincing.) Vanderbrouck, the owner of the local lumber mill, insults and demeans him in public. Mercaillou feels free to beat his lovely wife Rose (Isabelle Huppert) in the streets, because he doesn't think Lucien will do anything about it. Two local pimps literally push him around. The only people in town who don't hold Lucien in contempt are Rose, who is having an affair with him, and Anne, the newly-arrived schoolteacher.

A frustrated Lucien leaves town to visit his supervisor, Marcel. Marcel, who holds Lucien in a slightly more benevolent contempt than the villagers, tells him to assert himself. His advice is that when someone gives him trouble, he should give it back, but harder than they did to him.

Lucien takes his superior officer's advice to heart. He returns to the village and goes about getting revenge on everyone who has wronged and insulted him. By murdering them.