The Republic of Senegal (French: République du Sénégal) is a medium-sized country located at the westernmost tip of West Africa. The country contains the Cap-Vert ("Green Cape", not to be confused with Cape Verde, which also means Green Cape, but in Portuguese) Peninsula, officially the westernmost point of the Eurafrasia; Senegal is thus the westernmost inhabited territory in the Old World (seriously, it's even more western than Iceland, even though half of that country is above the North American Plate). Today, it's mostly known for being one of the few Only Sane Man among the many-troubled countries in Africa by having neither a (1) leader that's unbelievably self-serving, (2) sectarianism, nor (3) fundamentalism.

The region was originally ruled by various indigenous ethnic groups of Western Africa, including the Wolof, who established the Jolof Empire in the 14th century, and the Ghana Empire, who ruled the eastern part of the country. Toucouleurs (a subgroup of the historically-nomadic Fula people who are sedentary) and Soninke peoples made up the rest of the region's demography. While previously animist or followers of traditional religions, the people began converting to Islam through contact with the Almoravid dynasty to the north in the 11th century, although one ethnic group, the Serer, who lived in the southern Casamance region, refused to accept the faith until much later.

The Portuguese were the first European explorers to visit the region, although dominant power ultimately resided within the French. The colonial powers established Gorée, a small island nearby the capital Dakar, as a transit point for the slaves about to be transported as part of the Atlantic slave trade; today, it's a UNESCO World Heritage. Though the French at first only established coastal posts, they began to encroach to the interior, albeit with much local resistance, until the entire region was subjugated in the 19th century. It was established as the "Sénégal Colony" as part of French West Africa. Contact with the colonial powers brought to the region Christianity, which was mainly accepted by the half of the Serers who did not convert to Islam.

Independence was finally granted by the French in 1960, in which Senegal and French Sudan merged to form the "Mali Federation". However, Senegal quickly lost interest and eventually opted out just two months later, with French Sudan becoming known as just Mali. It also tried to form a confederation with The Gambia, the very tiny country that it completely surrounded to the north, east, and south, in the 1980s, as "Senegambia", but opted out when they felt that the confederation wasn't going anywhere.

Nevertheless, Senegal has been one of the success stories of African post-colonial democracies by having, y'know, actual democracy; the country was ruled as an autocracy from independence until 1999 when the country adopted a multi-party democracy system, and it hasn't worn out since. Even if the first 30+ were autocracy, the presidents (Léopold Sédar Senghor and Abdou Diouf) really had the country's best interests in mind (unlike, say, Equatorial Guinea's Nguema); Senghor was a Cultured Badass who composed the country's national anthem, while Diouf extended bilateral relationships with other countries. Notably, there is no coup/coup attempt since independence, both military or civilian, suggesting that a large part is contented with whoever-in-power.

There are several sore problems still affecting the country, though: the Serers of Casamance traditionally are rebellious against their masters and have attempted several separatist movements from time to time, one of which is apparently supported by Iran, which Senegal responded by temporarily suspending their relationship. This despite the fact that the first president Senghor was a native Serer and the current president (Macky Sall)'s wife is also a Serer. The second problem is a historical bad blood with neighboring Mauritania. The lighter-skinned Moors who rule over Mauritania have long been discriminating against the darker-skinned sub-Saharan Africans, whom they ruled and still rule as slaves (showing that racism towards blacks isn't confined to the Western world alone). The slaves tried to revolt and Mauritania responded by throwing them to Room 101, all the while banishing the rest as potential fifth columns of Senegal, even those that aren't Senegalese in the slightest. Senegal in turn held suspicion on the Moors in their country and expelled them too.

Demographically, Senegal is as diverse as other West African countries, with the Wolof, Fula, Serer, Soninke, Mandinka, and many others having pluralities in the country. Some French people reside here as a legacy of colonialism, and recently, Lebanese and Chinese people also immigrated as workforce. 94% of the total population subscribe to Islam, while the rest are mainly Christians and Buddhists; atheism is very rare, as in other parts of Africa (though you won't be a dead man walking if you are, unlike in neighboring Mauritania). The Islam practiced here is infused with traditions and Sufism; consequently Sufi saints and folk religious teachers are highly regarded, yet another contentious thing that sometimes gets the country into argument with the orthodox-Mauritania. The country is neutral, albeit west-lining, in world politics; contrary to what you might think, the country has a healthy relationship with Israel, and it in fact holds one of Israel's few embassies in Africa.

◊ due to certain strain of algae that inhabit it. The country's former tourist attraction was the Dakar Rally, which the country held from 1979 to 2007 with an end goal at Paris. However, due to security concerns in Mauritania, the rally was moved to South America, more or less rendering the rally's name an Artifact Title. 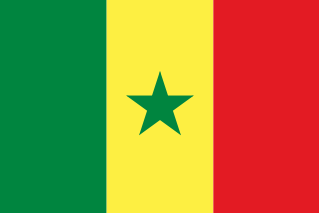 The flag uses the pan-African tricolor which includes green, yellow, and red colors, each representing agriculture, wealth, and the blood of fallen fighters, respectively, plus a green star at the center representing humanity. Alternatively, the tricolor may also represent the colors of the three political parties which merged to form the Senegalese Progressive Union, the party from where the first president Senghor came. The flag is nearly identical to the flag of Mali Federation (which the country was a part of), except the latter has a stylized human figure instead of a green star at the center, though it symbolized the same thing.