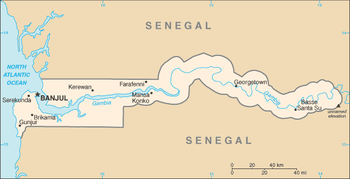 A thin, narrow country completely surrounded by Senegal except for the entrance to the North Atlantic Ocean on its west coast, the Republic of the Gambia is a West African country and former British colony built on the banks of the Gambia river, hence the country's name. The capital, Banjul, is located on the St Mary's Island (Banjul Island) where the Gambia River enters the Atlantic Ocean, with the largest city, Serekunda, being located further west on the mainland. The country is one of the only two in the world to have The officially preceding its name.
Advertisement:

The current border of the country was defined in 1889 after negotiations between the British and the French, who controlled Senegal. The boundary prevents the country from being defined as an enclave since sea access is available. Nevertheless, the Gambia remains politically and economically dependent on Senegal. This is most apparent during the constitutional crisis of 2016.

Like Senegal, the overwhelming majority of the population adhere to Islam. The Mandinka people are the plurality, followed by the Fula, Wolof, Jola, and Soninke.

It spent five years after independence in 1965 as a Commonwealth Realm, with Queen Elizabeth II as its head of state. Dawda Jawara led People's Progressive Party to dominate the country for 24 years. There was a communist coup in 1981, which the Gambia pacified with Senegal's help. Afterward, both countries held talks for a military union, with provisions that would lead to a full union (Senegambia Confederation). The plans failed to gain hold.

Another coup occurred in 1994 and this time, it succeeded. Colonel Yahya Jammeh ascended to power and promised an eventual transition to civilian government. The first post-coup presidential election was held in 1996, with Jammeh winning. He was re-elected three times.

Under Jammeh's rule, the Gambia exited The Commonwealth of Nations in 2015. He also changed the country's title to the Islamic Republic of the Gambia. Both policies were reversed by his successor.

In 2016, the country came to the world's attention due to a contested presidential election occurring that year, as well as the constitutional crisis following it. In a surprise result, the elections commission declared Adama Barrow the winner of the presidential election, with 43.3% of the vote compared to Yahya Jammeh's 39.6%. Jammeh had previously announced that he would step down if he lost the election, but declared the results void and called for a new vote. Troops were then deployed in Banjul and Serekunda, as the Economic Community of West African States delegates tried and failed to persuade Jammeh to step down. A coalition of military forces from Senegal, Nigeria, and Ghana invaded the Gambia in January 2017 to compel him to relinquish power. Jammeh eventually surrendered presidential duties in favour of Barrow and was exiled to Equatorial Guinea. 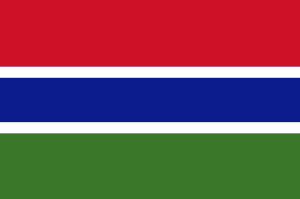 This flag consists of three horizontal red, blue and green bands separated by two thin white fimbriations. The red evokes the sun – given the Gambia's close proximity to the Equator – as well as the savanna, the blue alludes to the Gambia River, which is the nation's key feature and is where the country derives its name from, the green epitomizes the forest and the agricultural goods that the Gambian people are heavily dependent on, both for exports and their personal use, and the thin white stripes between them represent unity and peace.
The Gambian national anthem
For The Gambia, our homeland
We strive and work and pray,
That all may live in unity,
Freedom and peace each day.
Let justice guide our actions
Towards the common good,
And join our diverse peoples
To prove man's brotherhood.
We pledge our firm allegiance,
Our promise we renew;
Keep us, great God of nations,
To The Gambia ever true.
Government Miscellaneous