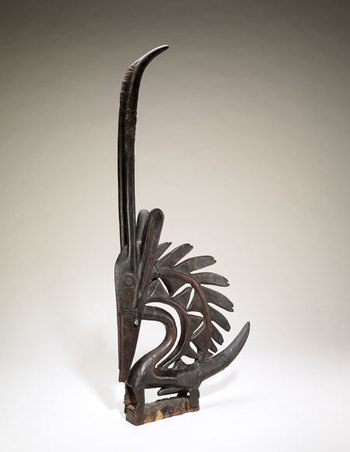 Chiwara, the antelope god of agriculture.
"But never try, wretch, to pierce the mystery which Mali hides from you. Do not go and disturb the spirits in their eternal rest. Do not ever go into the dead cities to question the past, for the spirits never forgive. Do not seek to know what is not to be known."
— the Epic of Sundiata
Advertisement:

Mande mythology comprises the pre-Islamic beliefs and lore of the Mande speaking peoples of West Africa. This corpus of traditional religion was known as "Bamanaya" after the Bambara/Bamana people, who were its chief adherents among the Manding peoples well into contemporary times. Traditional bards known as "djelis” in the Manding subgroup or more commonly "griots" in English are the primary sources of Mande legends. Initiates into the secret societies alone had knowledge of the more esoteric traditional myths.

The most notable group of Mande speakers were the Mandinka people who founded the wealthy and powerful medieval kingdom of Mali. After its collapse, bands of Mande warriors and adventurers called the Mane expanded towards the rainforests of upper guinea, bringing Mande language and customs such as secret societies with them.

Like many African traditional religions there existed a hierarchy of spirit with the omnipotent Mangala on top. Below him were the lesser deities: Faro, the water god(dess) who rules over rain, thunder, lightning, rainbows, the seven heavens, self-discipline, and the power of words; Pemba, the god of the earth, trees, and rebirth; Muso Koroni, the goddess of discord, plants, animals, fertility, and human speech; Ndomadyiri, the god of fire and first blacksmith; Teliko, the albino god of wind and sound; Surakata, the first griot who was as such god of music, storytelling, poetry, and other verbal arts; Dage (better known as Chiwara), the antelope god of agriculture; Sanen and Kontron, the hunting deities.

Inhabiting everything in the universe is a force called "Nyama". Nyama is a wild and unpredictable force that could be harnessed by skilled sorcerers for good or ill. The social caste known as "Nyamakalaw" or handlers of Nyama (blacksmiths, leatherworkers, and griots) were tasked with preventing Nyama from running out of control and shaping it for the benefit of man. Hunters lacked this natural gift, relying on magical skills and rituals instead. Another force was called "Wanzo". Wanzo is a negative force which bleeds into the world from Muso Koroni's influence. Wanzo is characterized best by impurity, ignorance, femininity, decay, and chaos. "Ni" is the vital force or soul which animates all living things. "Dya" is the spirit double, considered to be under the special protection of Faro. "Tere" which corresponds with the personality and individual character resides in the head. The tere comes from Pemba and transforms into Nyama at death.

Mande mythology had a significant impact on the mythology of surrounding peoples such as the Dogon, Fulani, Serer, and Wolof. Epics such as Sundiata and the Dausi are the most commonly known Mande legends. Mande traditional beliefs have survived to varying degrees of success into the modern-day. Despite the attempts of Islamic fundamentalists such as the Fulani in the 18th and 19th centuries belief in the power of ancestral spirits, witches, bush spirits, and magical charms lingers. Pagan heroes became "Walis" or Muslim saints. Cannibal-Witches became a cursed clan of sorcerers who dared drink the blood of the Prophet Mohammed. Witch doctors became "Marabouts" or Muslim sages. Charms formerly made up of plant and animal matter charged with Nyama became Gris-Gris bags inscribed with Quranic verses for similar effects.