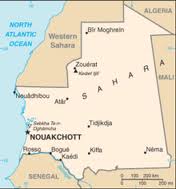 Mauritania has less than 4 million people spread over 1 million km2 of area, making it one of the most sparsely populated countries in the world. This is because the country is almost uniformly arid. The northern half is the Sahara, a mostly barren wasteland outside of a few oases and mountain valleys. The southern half, on the other hand, is the Sahelian savanna, whose shrubby vegetation is used for animal husbandry. In the extreme south on the banks of the Senegal River, there is a tiny region where arable land exists and precipitation is substantial, promoting a space for farming. The capital, Nouakchott, technically lies in the Sahara, but experiences less harsh climate due to its location on the Atlantic coast, where the Canary Current moderates the temperature.

The region's original population was a mixture of Sanhaja Berbers from North Africa and blacks from sub-Saharan Africa. Islam was introduced in the 11th century by the Almoravid dynasty of Morocco, whose founding fathers came from a tribe of the Sanhaja Berbers. Around the same time, the Arab tribe of Beni Hassan moved into West Africa, triggering a major social upheaval. Assimilating the Berbers, the Arabs dominated the upper class, who came to be called the Beidane, and subjugated the blacks. Some enslaved blacks later underwent Arabization themselves (cf. Sudan) and are nowadays called the Haratin. The lowest social stratum is occupied by blacks speaking the various sub-Saharan languages and therefore do not consider themselves Arab.

In the 17th century, the country was divided between several emirates, chief among them the Trarza. The Trarza came into conflict with France, who up until that point was uninterested in the mainly desert country, when it tried to expand territory beyond the Senegal River, threatening the Saint-Louis Colony. France gradually incorporated the emirates into its empire in the late 19th century, completing it in 1912. Two generations later, the country achieved independence in late 1960. Since the French presence was relatively minimal, the country did not undergo much change as compared to the pre-colonization era, unlike the rest of French West Africa.

The first president of Mauritania was Moktar Ould Daddah, a socialist autocrat. Under his rule, Mauritania annexed parts of Western Sahara following the withdrawal of Spain in 1975, triggering a disastrous war with the Polisario Front, the armed wing of the Sahrawi, and Algeria, who supported the Polisario. Weakened by years of conflict, Ould Daddah was toppled by Colonel Mustafa Ould Salek in 1979, who in turn was Kicked Upstairs when he proved unable to contain the situation. Under Mohamed Khouna Ould Haidalla, Mauritania pulled out of the war, recognized the Sahrawi claim over Western Sahara, and abolished slavery. Another era of authoritarianism followed his tenure when Maaouya Ould Sid'Ahmed Taya seized the presidency in 1984 and ruled for the next 20 years.

Under Ould Sid'Ahmed Taya, Mauritania improved its relationship with the West and became the third Arab country to exchange ambassadors with Israel. He was brought down by a military coup in 2005 while abroad. Another coup followed three years later, just as the country was preparing for elections, and placed Mohamed Ould Abdel Aziz (known for being a leading figure for the 2005 coup) as president. He won the elections in July 2009 (which he ran for since April). Ould Abdel Aziz was an ally of the West during the Islamist insurgency plaguing West Africa and, to his credit, was largely responsible for keeping the country safe from insurgents, unlike the situation in neighboring Mali. After two terms, he announced that he would not run for president again, paving the way for the first peaceful transfer of power since the country's independence in 2019. The president elected, Mohamed Ould Ghazouani, was handpicked by Ould Abdel Aziz, however.

Mauritania mainly exports minerals, especially iron, and fish. The economy is still dominated by agriculture and a solid half live below the poverty line (6% live on less than US$1.90 a day). The country is infamous for being one of the last nations on Earth to abolish slavery - but roughly 2% of the population are still illegally enslaved. Human trafficking, child labor, and female genital mutilation are also major human rights issues.

Also, note that many Mauritanian men have Ould (pronounced "wool") in their names. That means "son of" in Hassaniya Arabic and is the equivalent of Bin/Ibn in Eastern Arabic. The feminine equivalent is Mint, a form of Eastern Arabic's Bint. 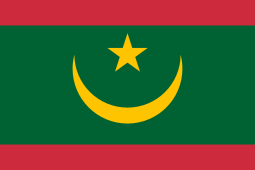