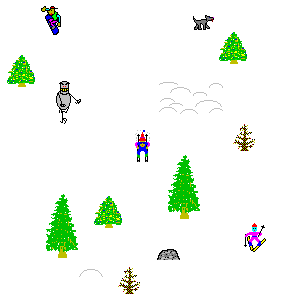 "Go that way, really fast. If something gets in your way, turn."
— Charles De Mar, Better Off Dead
Advertisement:

You'd think characters would be more careful about where they practice dangerous sports, but that wouldn't be funny or, for Video Games, fun, so when a character goes skiing he'll inevitably have to dodge all sort of obstacles such as snow mounds, snowmen, boulders, trees, and likely other skiers.

For added Rule of Funny, the ski-tracks go on both sides of the trees, leading to people staring at that and wondering how it could be possible (a gag first used by Charles Addams in a 1940 New Yorker magazine cartoon). Martin Gardner published a riddle once, about how such a thing can be possible in real life. He himself had 6 answers ready.note (1) The skier bumped into the tree but protected himself with his hands. Keeping one ski in place, he carefully lifted his other foot and moved to the lower side of the tree. With his back against the tree, he replaced his raised foot and ski on the other side, then continued down the slope. (2) The skier slammed into the tree with such force that his skis came off and continued down the slope without him. (3) Two skiers went down the hill, each wearing only one ski. (4) One skier went down the hill twice, each time with one ski on one foot. (5) A skier went down a treeless slope, moving his legs apart at one spot. Shortly thereafter a tree with a sharpened trunk base was plunged into the snow at that spot. (6) The skier wore stilts that were high enough and sufficiently bowed to allow him to pass completely over the tree. Someone sent him 23.

A common way to set this up is to have a character accidentally (or not, if daring, boastful, ignorant or just not smart enough) starts descending while oblivious to anything you need to know about skiing to not die horribly, and end up as a Human Snowball.