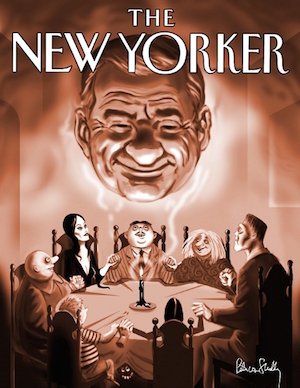 Charles Addams and his famous family.
"Normal is an illusion. What is normal for the spider is chaos for the fly."
Advertisement:

A long-time contributor of cartoons to The New Yorker magazine, Charles Samuel Addamsnote or "Chas Addams", as he usually signed his artwork (January 7, 1912 – September 29, 1988) specialized in whimsically grotesque scenes, which was evidently something of a case of Drawing What He Knew.

One set of his recurring characters became the basis for the television series (and later movies) The Addams Family. Addams also drew such classic one-off cartoons as a skier somehow going around a tree on both sides at once; a moustachioed villain with a young damsel slung over his shoulder heading down into a subway, presumably to tie her to the tracks; and a banana peel lying on a busy city sidewalk, cordoned off by "caution" signs.

(Fun fact: he actually was distantly related to John Adams and his family, despite the differences in surname spelling.)

Works by Charles Addams with their own pages:

Other works by Charles Addams provide examples of the following tropes: