"It doesn't take the voices of giants to change the world. Sometimes, it can all start with a whisper."
—-Adult Whispers' Closing Narration 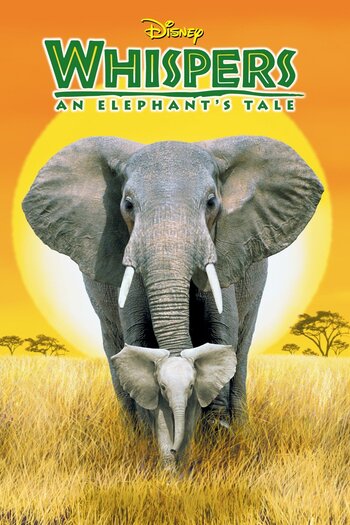 Whispers: An Elephant's Tale is a 2000 film produced, written and directed by acclaimed wildlife filmmakers Dereck and Beverly Joubert, and released by Walt Disney Pictures.

In the wilds of Botswana, a matriarch elephant named Gentle Heart gives birth to a son, who is gifted with an impressive trumpet. But soon after his birth, the family is attacked by poachers ("Takers," in elephant parlance). In the chaos, the calf is separated from his mother, and though he waits for her to come find him, she never comes. Worse still, the trauma of the poachers' attack has left him unable to trumpet anymore, which lends him the disparaging name of "Whispers."

Lost and alone, Whispers meets up with Groove, a sarcastic and emotionally distant elephant who recently fell out with her sister (and family leader), Half Tusk, and left the herd. Groove reluctantly agrees to help Whispers find his mother, leading them on an epic quest across the African plains, braving fire, lions, and poachers.