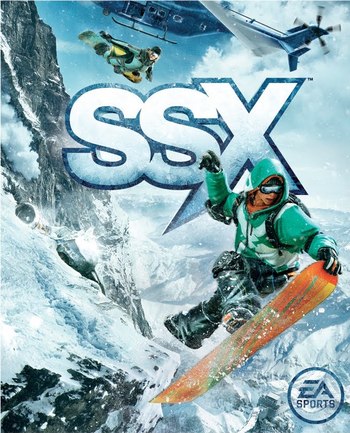 A series of snowboarding games by made by Electronic Arts under the EA Sports BIG bannernote except for the new SSX from 2012, which was a Continuity Reboot. It shares some similarities in style and mentality with the Tony Hawk's Pro Skater games, but places the action on snowboards (and on one occasion skis) and takes even more liberties in realistically portraying the actual sport in favor of a more arcade, over-the-top experience.

The series is inspired by the Real Life sport of "boardercross", a mix of snowboarding and motocross ("SSX" itself stands for "Snowboarding Supercross"). In reality, though, it's about a bunch of outrageous characters riding down a series of outrageous tracks doing outrageous tricks at outrageous speed. As you might have guessed from the overuse of the adjective "outrageous", the series is at the arcade end of the Sliding Scale of Simulation vs. Arcade.

Now with a Character Sheet under construction.