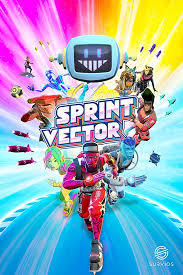 Sprint Vector is a Virtual Reality Competitive Multiplayer Racing Game, developed by Survios. At the time of its release, it was noteworthy for being the only racing game powered by arm-swing motion. To move, player must swing their arms as if they were running, or skating, or pulling themselves through the environment bodily. It's Better Than It Sounds, and even makes for a decent workout.

The Sprint Vector competition is an intergalactic racing event where competitors from across space and time run, climb, and glide through dangerous obstacle courses at the behest of their eccentric host and/or kidnapper, Mr. Entertainment. Mr. E has promised that the winner of the Sprint Vector competition will be granted whatever their heart desires, which is more than enough to motivate the skilled and eccentric racers to give their all.

It's possible that this is a lie, and it's all just a scheme to rake in tons of money from advertising endorsements. But never mind that, let's talk about our competitors!

Later, the roster expanded to include: