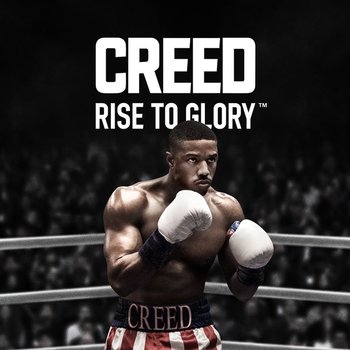 Creed: Rise to Glory is a 2018 Virtual Reality boxing game by Survios, based on the film Creed and the Rocky franchise.

The game is a Pragmatic Adaptation of the movie, where you play as Adonis (Donnie) "Hollywood" Creed as he trains and fights his way onto the world stage. It is set into a series of chapters, each of which distills the action of any Rocky movie - you do a Training Montage, then get into the ring and fight hard while "Gonna Fly Now" plays in the background. This being an active VR game, the training and the fight together provide a decent shadowboxing-esque workout.

The game also includes a multiplayer mode, allowing players to box each other.

The Rocky Legends update added four characters from the older films to play as - Apollo, Drago, Clubber and Rocky himself.