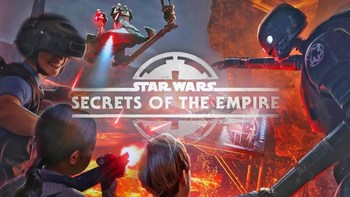 A galaxy far, far away needs your help
Advertisement:

Star Wars: Secrets of the Empire was a virtual reality (marketed as a "hyper-reality") experience set in the Star Wars universe, created by The Void

in conjunction with ILMxLAB

, with locations at Disney Springs in Walt Disney World near Orlando, Florida and Downtown Disney at Disneyland Resort in Anaheim, California. It was also available in several other The Void attraction parks worldwide. The Void lost its license from Disney in 2020 due to financial problems exacerbated by the COVID pandemic, which led to The Void defaulting on a loan that was secured by their intellectual property.

The experience starts with a pre-recorded video sequence by Captain Cassian Andor, recruiting the players to an important mission on behalf of the Rebel Alliance. Cassian informs the players that they will be going under cover as Stormtroopers to infiltrate a base on Mustafar, to recover the contents of a package recently obtained by The Empire that could be of vital importance to the Rebellion.

After the briefing, players are fitted with the VR equipment, including a haptic vest and helmet with visor. The players are led by the game guide into a nondescript room in which they put the visor down. At that moment, the VR begins, with the players appearing to each other as Storm Troopers, and the nondescript room transforming into the interior of a shuttle. As the mission begins, players leave the shuttle and walk onto the base. Players are really walking, unhindered, through actual rooms in the physical world, while the VR equipment gives them a full 360° immersion into the world of the game. At various points in the game, players interact with real-world items and equipment, which appear to the players with a VR overlay.