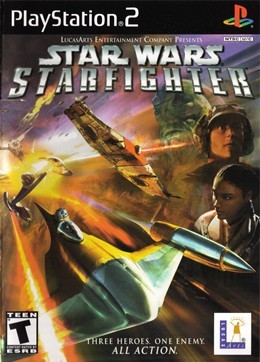 The galaxy stands on the brink
of war. In the Outer Rim, the
greedy Trade Federation is
mobilizing a secret army to
strike at peaceful Naboo.
Amidst the growing tensions, Bravo
Flight trainee Rhys Dallows
prepares to fly Royal Escort
and protect the Queen.

Meanwhile, the mercenary
Vana Sage has undertaken a
dangerous assignment for the
Trade Federation, a mission
that will lead her to a perilous
discovery.

And on the planet Lok, the
pirate captain Nym prepares
for his next raid, unaware that
the Trade Federation is
planning a deadly gambit that
will spell doom for his
homeworld and force three
unlikely heroes to save the
galaxy...
Advertisement:

Rhys Dallows is a rookie pilot from Bravo flight, Naboo's N1 Starfighter corps. His trainer, Essara Till, sets out to teach him the basics of how to pilot the N1, and immediately after, takes him as her wingmate to escort the Queen of Naboo as she attempts to meet up with the Trade Federation regarding a blockade on the planet. The Federation ship jumps away before the meeting and leaves a mercenary team to kill them all, but they are all fought off and the Queen is able to escape into hyperspace. The mercs' leader, however, takes what satisfaction he can in killing Essara, and blasting Rhys' starfighter, leaving him stranded and left for dead, saved by a Toydarian named Reti scavenging the remains after the battle, who whisks Rhys away to meet his ally.

Said ally, Vana Sage, has been contracted by the Trade Federation to do some mercenary work herself - including capturing a dangerous pirate named Nym who has been targeting the Federation for years - but after eavesdropping on a confidential conversation regarding the attack on the Queen during testing of new unmanned starfighters, the Trade Federation attempts to terminate their contract by force. She flees to the planet Eos below, discovering (and promptly becoming trapped in) a droid production factory; while she wants to dismantle it, she doesn't have the firepower to do so on her own. She disables the shield surrounding the facility and escapes to her hideout - only to realize Nym has escaped, and promptly locks her up in a cell on her own station.

Nym promptly returns to his pirate crew, the Lok Revenants, and ambushes a Trade Federation convoy passing near their home planet of Lok, shooting down a super-freighter and defending the crash site as his men salvage what they can. Alas, the Federation has finally had enough of the Lok Revenants and stages a massive assault on their base that night. Their attempted but failed evacuation forces Nym to flee back to Vana's station, where he finds her, Rhys and Reti waiting, the latter two having arrived first and freed Vana.

With all three now having grievances against the Trade Federation, they join forces and set out on a quest to destroy the Eos production facility, and then journey to Naboo just in time for the climactic battle.

The game featured a different style of piloting than the successful Rogue Squadron or X-Wing series of games - closer to Ace Combat in the Star Wars universe - but it was far from poorly-received. It proved successful and popular enough that a sequel was released a year later to tie into the new movie. However, the game hasn't aged terribly well with time, as Steam's rating system gives it mixed reviews compared to the positive reviews it got at release.