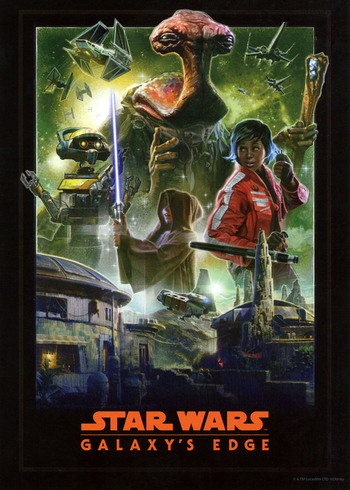 It is a dark time for the RESISTANCE.
Following the devastating Battle of
Crait, the freedom fighters have fled
with General Leia Organa to an
undisclosed location.

Meanwhile, hunted by the FIRST ORDER
and Supreme Leader Kylo Ren, a band
of Resistance supporters has established
a temporary outpost on the remote planet
of Batuu, thanks to scouting by
Resistance spy Vi Moradi.

Here on the Outer Rim, the Resistance
is rebuilding and searching for recruits
to join the cause and help save the
galaxy from tyranny…
Advertisement:

Star Wars: Galaxy's Edge is a themed land in Disney Theme Parks (Disneyland and Disney's Hollywood Studios, with a Disneyland Paris version being planned) that is based on the reboot of the popular Space Opera franchise Star Wars. Disneyland's version debuted first on May 31, 2019, and the Walt Disney World version opened later on August 29. The European version is set to open somewhere between 2022 to 2025. Unlike its sister attraction Star Tours, which plays fast and loose with continuity, the land is intended to fit within the current series canon.

Galaxy's Edge is set between the events of The Last Jedi and The Rise of Skywalker, and takes place on the Black Spire Outpost on Batuu, an Outer Rim planet on the edge of Wild Space. Millennia ago, in the days before the invention of the hyperdrive, it was a common stop for travelers, but has long since settled into a sleepier backwater. However, it was still appealing to pirates, smugglers, and adventurers looking to find a crew. Now, in the midst of the war between the First Order and the Resistance, Black Spire bustles with activity as the Resistance looks for recruits and supplies and the First Order seeks to root them out.

The Florida version of the land also includes Star Wars: Galactic Starcruiser, which opened in March 2022. While billed as a hotel, it's more accurately a two-night LARP/Dinner Theater event. The Halcyon is a luxury cruise ship planning a stop at Batuu when it gets caught up in the Resistance/First Order conflict, with the various factions aboard the ship recruiting passengers to aid them.

Tropes relating to the land and its attractions: