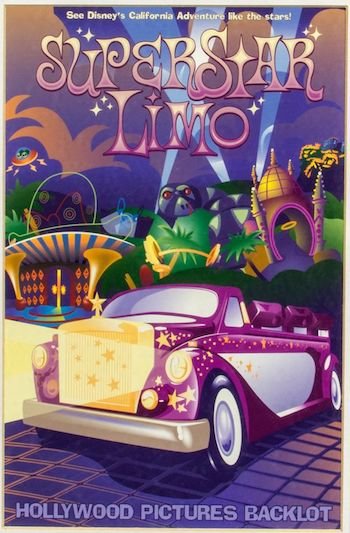 "Are you ready to do a lot of pretending?
Pretend you just arrived at Los Angeles International Airport. Pretend you’re the newest movie star in Hollywood. Pretend your ride vehicle is a fancy chauffeur-driven limousine. Pretend that your chauffeur is narrating your journey from the airport to a big Hollywood premiere, although the ride vehicles don’t have drivers. And pretend that people like Regis Philbin and Cindy Crawford are big Hollywood stars.
Advertisement:
Good. Now you’re ready to take a Superstar Limo ride.
—Yesterland

's article about the ride

Superstar Limo is a dark ride that opened with Disney's California Adventure in 2001.

On the ride, guests rode purple stretch limos through a cartoony rendition of Hollywood on their way to a movie premiere. Along the way, they encountered celebrities such as Drew Carey, Whoopi Goldberg and Antonio Banderas.

Because of how unpopular the ride was with guests, it closed less than a year after its opening in 2002. A few years later, it was replaced by a Monsters, Inc.-themed dark ride called Monsters Inc. Mike & Sulley to the Rescue!.