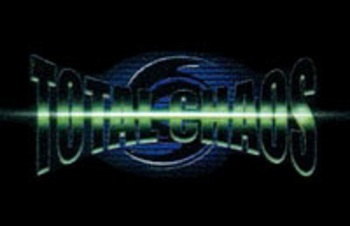 Wander through a top secret underground military base where captured aliens are on the loose and thirsting for blood. (Description)
Advertisement:

Total Chaos was a haunted house from Universal Studios' Halloween Horror Nights 2000, located in Soundstage 22 along with Anxiety In 3 D. The entrance was lit with red lights. Between the soundstage pillars were a large sign with the words "HALLOWEEN HORROR NIGHTS" and two smaller signs with the words "TOTAL CHAOS" and "ANXIETY", showing the way to the eponymous haunted houses.

The full contents of the house are unknown, but at one point, the guests were transported via slide into a four-foot-wide room filled with small, glowing balls. They were blasted with air to ensure they would get on their feet, and when they did this they were blinded by a strong flash of light. When their eyes adjusted, they would spot decapitated heads seemingly floating around in the air. As the guests moved through the ball pit, a scareactor portraying an alien creature would scare them from above and behind, accompanied by a loud scream.