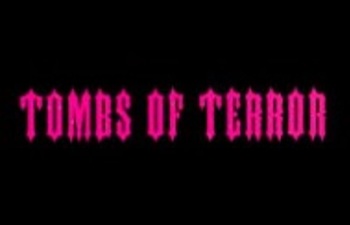 A terrifying journey into a New Orleans cemetery leads you deeper and deeper into the dark world of blood-thirsty vampires, murderous mutants and deranged, chainsaw-toting maniacs. (Description)

Tombs of Terror was a house from Universal Studios' Halloween Horror Nights 1997, located in the Earthquake queue. It consisted of a tour through a decrepit New Orleans funeral parlor containing various unsavory creatures.

According to concept art, the facade was the elaborate entrance to the tombs, with marble pillars and segmented, broken glass windows. Concept art also shows that one room featured four people carrying black umbrellas mourning over a coffin, and another featured the Rat Lady banging on the glass in a glass-covered hole in the wall behind some pipes.

Tombs of Terror contains examples of: