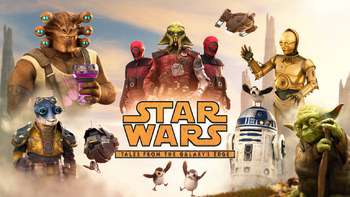 "The thing I love the most about Black Spire Outpost? You never know who you're going to cross paths with."
— Seezelslak

Star Wars: Tales from the Galaxy's Edge is a 2020 episodic virtual reality Star Wars game for the Oculus Rift, released as a part of the multimedia project promoting the Star Wars: Galaxy's Edge theme park.

You, the player, are a simple droid mechanic working under Mubo until your ship is suddenly attacked by pirates from the Guavian Death Gang. Fleeing to the world below, your pod lands in the outskirts of Batuu's Black Spire Outpost. Being hunted down by the Guavians, you'll be exploring the outpost in the meantime until you can find a way off this rock.