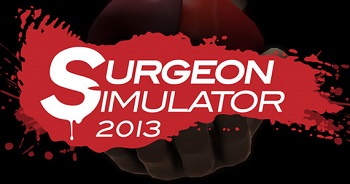 Surgeon Simulator 2013 is an inspiring video game in which you take on the role of a skilled surgeon, deftly saving precious lives on the operating table.

Surgeon Simulator 2013 is, if anything, a very inaccurate simulator wherein you control the hand of "surgeon" Nigel Burke, allowing you to attempt all kinds of bizarre operations. Since Nigel is apparently either paralyzed, coming down from the effects of anesthesia, or grossly incompetent, this mostly involves failing in hideous yet hilarious ways; as the first hurdles involve learning to grasp objects, it isn't hard to imagine the results you'll be seeing.

The original version, created in just 48 hours, gained popularity very quickly due to its infamously horrible (albeit humorous) control scheme and difficulty. A full version was released on Steam

in April 2013 to critical acclaim.

During the 2019 Game Awards, Bossa Studios announced a sequel

, Surgeon Simulator 2 that entered into open beta in August 2020.

See also I Am Bread, another Bossa Studios game with similarly wacky controls. Nigel later made an appearance in the Spiritual Sequel, I Am Fish.