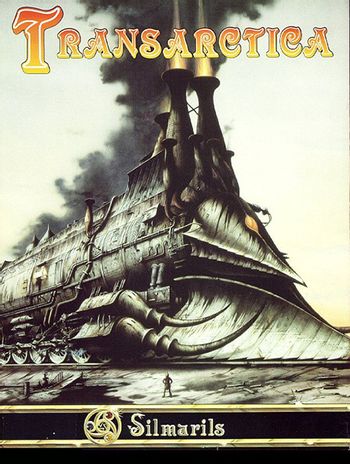 Transarctica is a 1993 strategy/adventure game developed by the French software company and game developer Silmarils. It was released for the Amiga, Atari ST, IBM Personal Computer, and Macintosh. It originated as an adaptation of the French novel series La Compagnie des glaces ("The Ice Company"), a 98-volume series by Georges-Jean Arnaud with the same premise. This game has a poor English translation, but that doesn't stop it from being enjoyable.

In the year 2022, the world was plagued by Global Warming. In order to cool the Earth, Professor John Merrick decides that nuclear weapons are the solution. By detonating nukes at each pole, a huge cloud of dust and steam would form thick clouds that would block out the sun. And that's exactly what happened, except that the clouds were bigger than predicted and the Earth cooled down so much it brought about a new Ice Age. With the world in a deep freeze, civilization came to an end: nice job breaking it Merrick.

By the year 2714, the world is still frozen, humanity is barely hanging in there, and the sun becomes a thing of myth. Oh, and woolly mammoths are no longer extinct. The only way to travel safely across the frozen wastes is by train, and only the Viking Union controls the worldwide railroad. A cult of sun believers, known as the Ambivalents, are convinced that there is a heavenly ball of light beyond the clouds, and will do anything to prove it. The leader of the fanatical sun cult, you, has managed to take over a Cool Train, the titular Transarctica, and they set out to realise their dream of the sun's return. Except for the other Cool Trains still owned by the evil corporation, who isn't quite as keen to bring back the Sun as you and your followers.

This video game provides examples of the following: