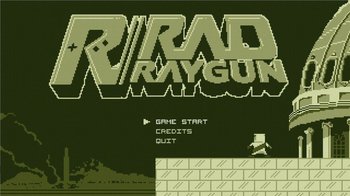 Super Rad Raygun is a Retraux Platform Game by TRUFUN Entertainmnet and Screwattack Games done in the style of a Gameboy game and released for PC through Steam on November 8, 2016. The game starts you off as a robot named Rad who is assigned by protect the President to go to Russia during the Cold War and end communism. In the first level Rad must protect the White House from an onslaught of Communist Invaders. After the first stage, the player gets to a world map where they can select whatever level they want, all while having to collect items to upgrade themselves and get more powerful.

Simply defeating enemies allows the player to collect Bits, the in-game currency that can be used to upgrade items in game. The items can give Rad new powerups, increased health, or simply just upgrade his basic blaster, and all of it is governed by an energy meter that has to recharge. There is also a system of collectible batteries to power up basic abilities. The energy meter recharges by standing still, which is good because even moving can drop it, and losing energy will leave you vulnerable. The batteries can also be used to decide what powers you take into each stage when you choose a stage.