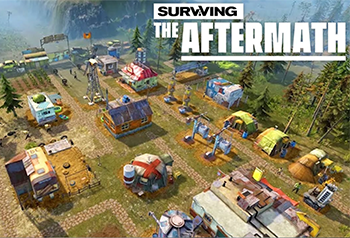 Surviving the Aftermath is a Science Fiction settlement simulation game released on October 19, 2019, developed by Iceflake Studios and published by Paradox Interactive. On PC, it was a temporary Epic Games Store exclusive on early access, and was released on Steam on October 22, 2020, with the game leaving early access and entering 1.0 on November 16th 2021. A Nintendo Switch version is planned for Spring, 2022.

The game is a city builder, like Tropico but set after what is implied to be a nuclear/lunar apocalypse. You are a leader who must ensure the survival of your colonists in the face of meteor strikes, nuclear fallout, extreme winter, mutant animals, and marauders.