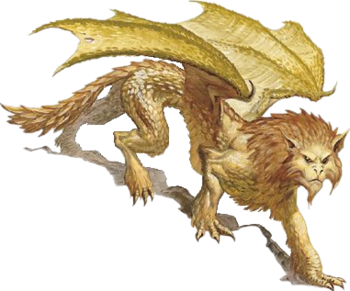 "I thought a dragon would be like a cat in some ways, that same sort of self-satisfied attitude."
— Christopher Paolini
Advertisement:

Dragons are one of those fantasy creatures with numerous variations, depending on the era, culture, and creator. They're usually reptilian but may also have bird-like feathers or even some mammal traits. But one thing that shows up more often than you'd expect it to is dragons that look and act like cats.

In some cases, this is rather subtle, with simple allusions to the eyes and the feet being vaguely feline, or references to the traditional arrogance assigned to felines or to how cats toy with their prey. Other times, though, it can be much more blatant, resulting in dragons that literally look and act like cats. This isn't a new phenomenon; in fact, it's been argued that the original inspiration for dragon myths around the world was a hybrid of the various predators faced by early humans, including large cats.

Both European and Asian dragons have incorporated various cat motifs in the past, though in different ways. The Chinese dragon is said to be a combination of various animals, one of which is the tiger, and they are often drawn with feline-looking claws, whiskers, and noses. European dragons tend to be more outwardly reptilian, but their movements and the shape of their eyes are often described as cat-like.

More recent writers, though, are likely to play up the cuteness of the dragon's feline aspects rather than the fierceness. If Reptiles Are Abhorrent, then it helps for a sympathetic dragon character to have some recognizable mammalian features. Villainous dragons who are described as cat-like usually emphasize their vicious and savage aspects.

A Shoulder-Sized Dragon or Delightful Dragon will very often act like a lizard/housecat combination. Contrast with All Animals Are Dogs, as dragons are often the exception to this rule, and Werewolves Are Dogs, for a similar trope to the previously mentioned about another mythical creature behaving like a dog. See also Feathered Dragons, for another portrayal of dragons with the characteristics of non-reptile animals.