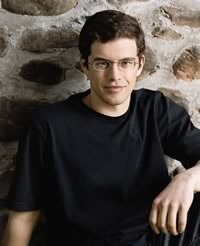 "I love telling stories and I love writing so the fact that I can do it professionally is something that I've always been very grateful for."
Advertisement:

Christopher Paolini (b. 1983) is the author of the Inheritance Cycle, a series of High Fantasy Door Stopper novels. He finished writing the first book, Eragon, at the age of nineteen, though it was heavily marketed as a book written by someone who "graduated high school at fifteen". It was published by his parents before Knopf, a publishing company, picked it up (his parents started an independent publishing company to produce the book; it is an Urban Legend that they already owned one – a company the author describes as "my parents, my sister and myself, sitting around our kitchen table"

). To many people's surprise, it took off, mostly because of Carl Hiaasen recommending it to Alfred A. Knopf after his stepson enjoyed the book, though fantastic marketing on behalf of Paolini and his family, such as months of visiting schools across the United States to promote the book (which he did in "period" garb), played its part.

A homeschooled Montana native, he's become quite the controversial figure. He has many fans, as well as many detractors, mostly due to having used many familiar ideas, plot points, and tropes; Star Wars, The Lord of the Rings, and Dragonriders of Pern are obvious influences.

He has also written a science fiction novel, To Sleep in a Sea of Stars, his first non-Inheritance Cycle novel.

Tropes that apply to Mr. Paolini (or at least appear to):