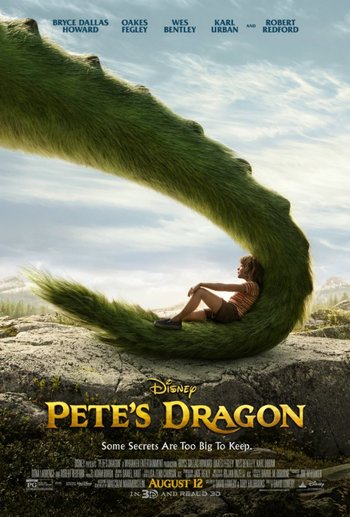 A remake of the 1977 Disney film Pete's Dragon, continuing Disney's trend of rebooting much of their fantasy catalog in live-action, released in the summer of 2016. Now a CGI character, Elliott (voiced by John Kassir) is a cryptozoological oddity of the Pacific Northwest being studied by Mr. Meacham (Robert Redford) and his park ranger daughter Grace (Bryce Dallas Howard). New evidence of the dragon's existence comes to light when a feral child named Pete (Oakes Fegley) emerges from the woods, having spent six years living with the beast.

The movie was directed by David Lowery. After the cut was shown to Disney, they immediately signed him on to direct the upcoming live action version of Peter Pan despite the movie not being screened by the public yet.