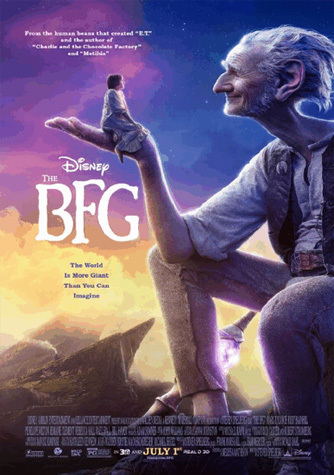 The BFG is a live-action and CGI adaptation of Roald Dahl's children's book. It was directed by Steven Spielberg, distributed by DreamWorks/Amblin Entertainment and Disney, and released in 2016.

One sleepless night in England, a young orphan named Sophie spots a mysterious giant, who kidnaps her and takes her to the mysterious Giant Country. There she discovers he is the Big Friendly Giant who catches dreams in secret and gives them to the sleeping humans. But the BFG is not so big compared to his larger man-eating neighbors, who have a suspicion that he's got a child with him. Sophie and the BFG embark on dream-hunting, giant-dodging adventures, and hatch a plan to deal with the massive cannibals for once and for all.

This is the last film written by Melissa Mathison

before her death from cancer in 2015.

Has nothing to do with absurdly large guns.

The film of The BFG provides examples of: