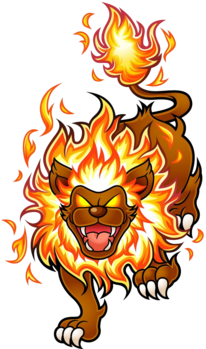 Across various human cultures, lions have been depicted as the king of all animals, due to their large manes and beautiful appearances. Whenever there's a lion in a fictional work, it usually may be a figure of authority or royalty. Likewise, if the lion is part of a group of heroes, it can play the role either of The Hero or The Leader.

Similarly, fire has been seen as an important symbol in human cultures since ancient times. Being a symbol of warmth, light, protection, and even creation. It's common to see fire along with other elements as part of a Four-Element Ensemble.

So naturally, many artists, writers, and other media creators would put the two together to create a fiery lion, possibly due to the reasons stated above. It may also be due to the fascinating manes of lions, which can look like cartoonish depictions of fire.

This trope is Older Than Steam with the alchemical image of a lion eating the sun, and with the Western Zodiac sign Leo

being a fire sign and The Sun as its domicile.