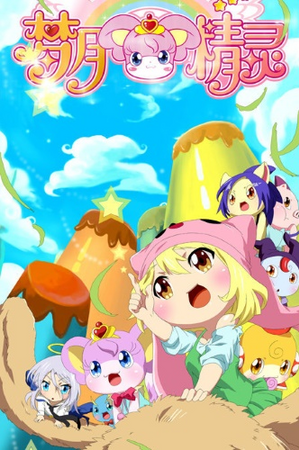 Nana Moon (梦月精灵 - pinyin "Meng Yue Jingling", literally "Moon Dream Elves" in English) is a Chinese animated series that aired in 2012 and is based on a series of virtual pet toys made by the company M&D and greatly inspired by Tamagotchi.
Advertisement:

A girl named Keke (pronounced "Coco") accidentally finds her way to a section of the moon called the Moon Haven, populated by all sorts of moon genies. Keke is immediately thought to be from a prophecy about the Moon Haven being visited by a human before entering a great crisis, is named the kingdom's genie tutor, and together with her new friend Princess Amy she keeps the Haven out of trouble while searching for seven special treasures.

Not to be confused with the EastEnders character also named Nana Moon.