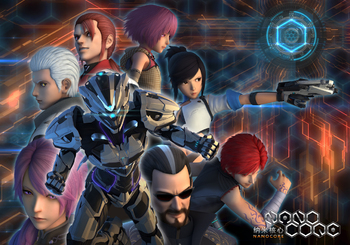 Nano Core (Chinese: 纳米核心) is a Sci-fi Chinese CGI cartoon made by Coastline Animation Studio that began airing in 2014.

In the planet of Birthigin, humans will never stop searching for a brighter future despite the many hardships. In revolutions and evolution, human keeps challenging the creator, and which induced contractions intensifying. The humans choose to wake up and struggle for their own ideals. They end up braking the peace and anger sweeps the whole planet, resulting in an outbreak known as the Purple Fog.

Our story centers around Ray, a young Aesir sent to unknown land after his mother figure, Heyar Adas, believes that he deserves to live as a human. He gets discovered by a pair of siblings, Nova and Miya Fentis, but is shortly separated after their home gets attacked by soldiers sent by the Aesirs searching for him. He later teams up with Tangxin, a young agent of the Bing family and Lozo, a sniper from the Shark Squadron, to avoid his pursuers.