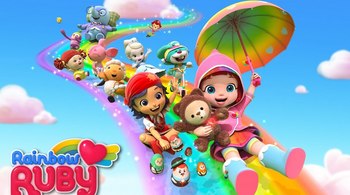 Rainbow Ruby is a Chinese-Korean animated series produced by produced by 38 °C Animation Studio, CJ E&M Corporation in South Korea, China Entertainment Corporation and DHX Media. It tells the story of a young girl named Ruby who owns a magical teddy bear named Choco. Whenever a crisis occurs in the magical land of Rainbow Village, Choco's heart will shine, which sends him and Ruby there. To solve the problem, Ruby uses her Rainbow Roller to transform herself into the appropiate job costume.