Animation / Noonbory and the Super 7 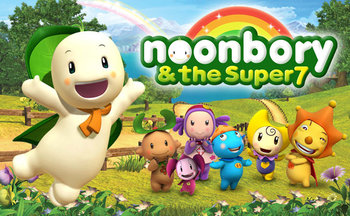 Noonbory and the Super 7 (눈보리note Nunboli, roughly translated as Blizzard or Snow Barley) is a South Korean-Canadian All-CGI Cartoon series, made by Dai Won and Cookie Jar Entertainment and based on the mascot of a line of stationary. In the United States, it aired on CBS' Saturday Morning Cartoon block at the time, Cookie Jar TV.

In the whimsical world of Toobalooba lives chibi-like creatures known as borys. Noonbory is a white-colored bory who leads a team known as the Super 7, whose powers are all based off of the five human senses. Lunabory is a yellow bory with super sight, Cozybory is a purple bory with super touch, Jetybory is a pink bory with super hearing, Pongdybory is a blue bory with super smell, and Totobory is a brown bory with super taste. There's also Lukybory, who represents nonsense and, like Noonbory, doesn't have a superpower. Together, the borys defend Toobalooba from the gurys, the show's bad guys, which consist of such characters as Wangury the frog pirate, Coldygury the snowman, and Rosygury, who loves flowers.

It got a second season called Tooba Tooba Noonbory, which shifted the genre from a superhero plotline to a Slice of Life story. This second season was only released in South Korea.

After Cookie Jar Entertainment was bought by DHX Media, early episodes surfaced under their "Junior DHX" name, with an added narrator and new outro, the latter of which caused certain scenes to be trimmed down.

The entire series can be watched on YouTube in English

.note Due to No Export for You, it is only available in Korean.

Coldygury sleepwalks to Borytown to show off what the colour white looks like under the nighttime filter.

Coldygury sleepwalks to Borytown to show off what the colour white looks like under the nighttime filter.