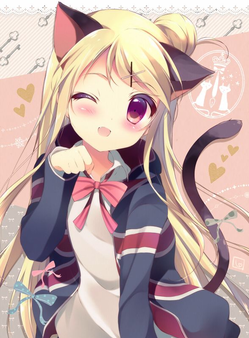 A character is supposed to be imitating or acting like a cat, so they start batting at a moving object with their fingers curled inwards to imitate the rounded look of a cat paw. Bonus points if they start licking this faux paw. This move is often favored by Catgirls.

This move also doesn't actually make any sense if the person in question is supposed to be acting on actual cat instinct: when a real cat grabs at something, its digits will be splayed out as far as possible to maximize their grab capacity. When that's not what they're doing, the motion serves two purposes: it more closely mimics the shape of a cat's paw than a fingers-extended position does, and it reinforces that the person is imitating a cat, not merely swatting at a mosquito.