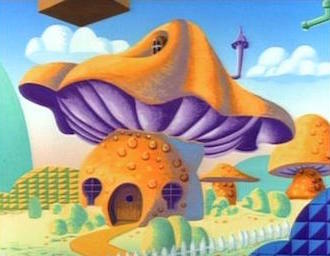 A common feature Beneath the Earth, in the Mouse World and in the Enchanted Forest alike, it is not uncommon in fantasy settings to see people making their homes in hollowed-out mushrooms of various sorts. More often than not, this will happen in one of two ways, although exceptions and overlap of course exist:

Sometimes, this kind of residence will be made out of normal-sized mushrooms and will be the home of choice for diminutive humanoids such as gnomes, fairies, pixies and other such Lilliputians. These Mushroom Houses will typically look like toadstools with stout stems fitted with doorways and windows, and with the inside furnished to provide its inhabitant a comfortable home. The mushroom's cap — which will often, but not always, be red with white spots in resemblance to a fly agaric

— may or may not be fitted with windows of its own. This sort of house is a common feature of the more magically inclined Mouse Worlds.

The other common variant involves normal-sized people living in giant-sized mushrooms instead. These will typically serve as a much more alien variant of the Arboreal Abode, highlighting the alien, magical or generally otherworldly and unusual nature of the place they're found in. This type may sometimes be paired with intelligent mushroom people.

See also Arboreal Abode, for the variant of this trope as applied to plants, and Fungus Humongous, for when normal-sized people live in house-sized mushrooms.