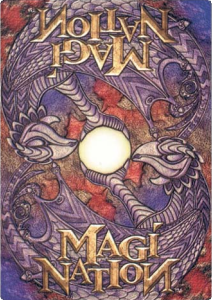 Magi-Nation is a Collectible Card Game produced by Interactive Imagination. The game was set in a far-off world called the Moonlands, located on the moon of a larger planet. The inhabitants were called Magi and they used their energy and the power of a stone called Animite to cast spells, forge powerful relics, and to summon up enormous creatures called Dream Creatures with which to work and battle. Players of the game took place in those battles, using Magi cards, Spells, Relics, and the all-important Creatures. The goal of the game was to defeat your opponent's three Magi cards by reducing his energy to 0 while he had no Creatures in play. It had a small but devoted fanbase, but little funding; like so many good things, it faded into the ether. Over its full run, it produced six complete sets (one went unreleased, but significant portions of it can be found online), numerous promo cards and two Game Boy pseudo-Mons RPGs.

After the game ended its run in the USA, it continued to be released in Japan for two full years after the final US release. The official U.S. site teased that the sixth set would be released to coincide with a CGI Animated Series that was currently in development.

Unfortunately, the cartoon became trapped in Development Hell. Six years later, the cartoon was released. It was traditionally animated using an Animesque style.