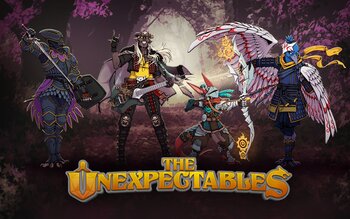 Season 4 Cover Artnote From left to right; Remy, Panic, Task, and Greckles
Abacus: So, you're not exactly the people I was expecting...
Panic: We get that a lot.
—A recurring exchange.
Advertisement:

The Unexpectables is a weekly Actual Play role playing series, with Nadine "Monty Glu" Arnott serving as the Game Master, using Dungeons & Dragons 5th Edition. Monty is joined by players Chris Zito, Gaijin Goombah, Connor "Distortion Devil" McKinley, Monty's brother Curtis "Takahata 101" Arnottnote up until his departure, and Edward Bosconote who was originally a reoccurring guest. The setting of the game is the mysterious land of Alivast, a relatively unknown frontier land. The players' characters, each having come to this new land for their own reasons, form a band of adventurers, eventually dubbed the Unexpectables.

The campaign streamed Wednesdays on the Unexpectables Twitch Channel

until March 30, 2021 where the campaign ended at 201 episodes. The streams were originally archived on Taka's YouTube channel

, but were relocated to an official Unexpectables YouTube channel

on April 13, 2022. A major announcement (also on April 13, 2022) confirmed that the channel will still be active and releasing new content, primarily with a sequel campaign starting May 4: The Unexpectables II Alton Frontiers, a trailer for which can be viewed here

There is also a podcast, and two sister campaigns which air on alternate Saturdays: The Prince Division, a modern fantasy set in a different D&D setting; and Gateway, a post-apocalyptic game using a homebrewed system, inspired by the Fallout franchise. Additionally, since 2018, every October on the channel has become "Orktober", with Connor running an Ork-centered campaign within the Warhammer 40,000 universe until 2021, when it was re-jiggered into "Gob-tober" due to Games Workshop becoming more strict with their intellectual property rights.

The Unexpectables contains examples of: