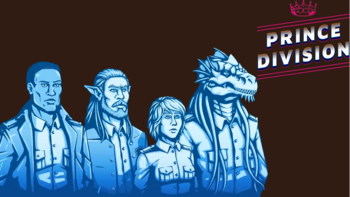 The campaign is set in Rampoon City, a Mega City where magic and technology live hand in hand, and the fantasy world has progressed far into the modern day. The story follows Michael Bryant, Khel Zouren, Virro Tannis, and Lauren Gibby as the newest members of the Rampoon City Police Department's understaffed Prince Division. They're tasked with protecting "Princes and Princesses", humans with an unusual amount of magic power that can be exploited by other creatures, or worse.

The campaign streams on the Unexpectables's Twitch Channel

. The Prince Division episodes are also available in podcast form on Spotify. In October of 2020, the show took a month-long hiatus to become a Ravenloft campaign run by Bosco. In 2021, the campaign now shares a timeslot with a separate campaign called Gateway, and moved to a bi-weekly schedule as a result.

The Prince Division contains examples of: