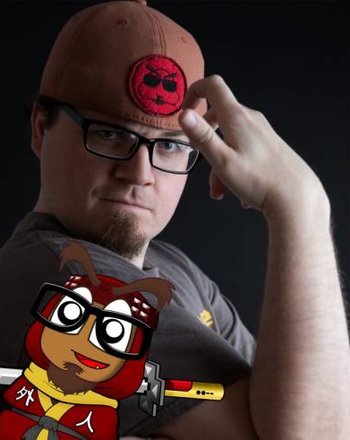 Gaijin Goombah (real name Michael Sundman, born September 5, 1984) is an ex-English teacher turned video game analyst who focuses on culture, especially (but not exclusively) Japanese culture. His main show is Game Exchange, though he also does Gaijin Gamers Play, GG IRL, and Goombah Rage, Which Ninja, and Yokai Hunters (originally titled Yokai Watchers, but was changed to avoid confusion with the game series of similar name), and his videos appear both on his own YouTube channel — Gaijin Goomba Media

— and on the Game Theorists channel. He recently began a more personal channel about his experiences with Japanese culture and his opinions on his time there called Gaijin Perspective.

Originally, he appeared as a cartoon Goomba (though keeping his glasses and beard) with his voice altered. He then split himself between his real-life self and his mascot version, especially as he started collaborating more with Team Four Star, culminating in their creation of a channel focused primarily on anime coverage, Four Star Bento. He also appears as one of the main characters with other Team Four Star creators on The Unexpectables as Greckles.

Gaijin Goomba (both the real person and his cartoon goomba counterpart) explain to the viewers just what the Raiju is.

Gaijin Goomba (both the real person and his cartoon goomba counterpart) explain to the viewers just what the Raiju is.