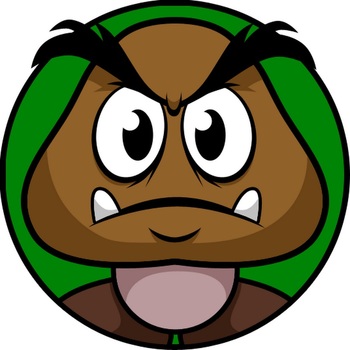 Just a lonely goomba.
I'm a Lonely Goomba
Stuck between two pipes
(well) Guess I'll keep on gaming note This verse was originally "Guess I'll play this Game Boy" until the intro was changed in 2015
For the rest of my life
A YouTuber animated as a lonely Goomba with nothing but a Game Boy Advance, Nintendo DS, and a whole bunch of Often-Terrible games to play.
Advertisement:

The main part of his channel is the game reviews, which are played out live like a mini-Let's Play. He usually ends up hating them. However, he also has other series, like his "Ask Goomba" Q&As and his "Goomba Gripes" rants, where everything is inexplicably made of paper. He has also done collaborative videos with Gaijin Goombah and It's a Dog and Game, among others.

Starting with his Club Penguin review, all of his videos began to form a continous arc, each of which are called "worlds":