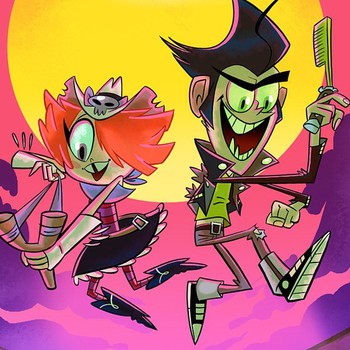 Long Gone Gulch is an original animated series created by Tara Billinger and Zach Bellissimo. It has been under development for many years. Its influences include The Good, the Bad and the Ugly, Alice's Adventures in Wonderland, The Never Ending Story, and The Mighty Boosh.

Two screw-ups, Snag (Danny Cooksey) and Rawhide (Elizabeth Daily) find themselves bestowed as the new sherrifs of a strange world adrift in an ever moving dust cloud. "Long Gone Gulch" holds the inhabitants of myths, urban legends and folklore from around the world. They travel through the land when they are needed and encountering all manner of adventures along the way.

The Go Fund Me page can be found here,

and the official Tumblr blog can be found here.