Hold Up Your Score 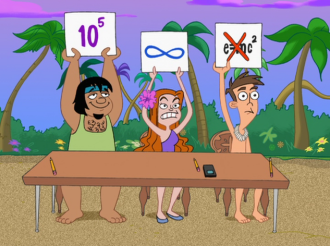 The next person got three noses.
Advertisement:

Somebody does something stupid or amazing; another character (or several), who witnessed the event, holds up a sign with the score. Frequently, the sign comes from nowhere; a table might be provided as well. The score can be anything, but it's usually very low or very high. Another common gag is for one of the judges to seemingly award a 6, only to realize they had it upside down. And then sometimes the score doesn't even make any sense, such as in the picture provided here.

In works with international judge panels, there will often be a judge who's stereotypically hard to impress—back in the day, it was the Soviet judge, and in food competitions it's usually the French judge. Reality TV shows favour the Mean Brit (e.g. Simon Cowell).

This comes from the world of sports, like figure skating and gymnastics, where athletes' scores are announced by having the judges hold up signs with numbers on them. Or at least, that's the trope— nowadays, they just punch numbers into a computer.