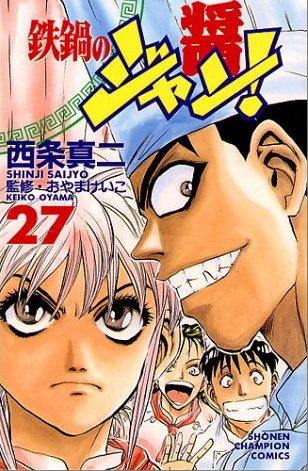 A 27-volume manga created by Shinji Saijyo in 1995, with technical advisor Keiko Oyama.

After his grandfather's death, chef-in-training Jan Akiyama comes to Tokyo to further his education at the Gobancho restaurant, owned by Mutsuju Gobancho, his grandfather's old rival. Being a Jerkass, Jan introduces himself by insulting the restaurant's fried rice, and demonstrating his own culinary skills.

This quickly causes friction with Kiriko Gobancho, granddaughter of the restaurant's owner, and a promising young chef in her own right. She and Jan quickly become rivals, largely because of their opposing philosophies about cooking: while Kiriko believes in keeping her customers in mind, the misanthropic Jan believes that "cooking is about winning" — creating dishes that will draw attention despite the disgust or hatred of the eater. Nevertheless, while not really "joining forces", they both still work against evil food critic Nichido Otani ("The man with the tongue of a God"), humiliating him by serving him dishes whose ingredients he cannot identify, despite his reputation. Otani vows vengeance, and sets up a series of rival chefs and tournaments in an effort to crush Jan and the Gobancho.

After the original series ended in 2000, Saijyo started writing a revival, Iron Wok Jan! R - The Summit Operation, in 2007. ComicsOne and DrMaster published the original manga in English from 2002 through 2007; there are no plans to publish R in English yet.