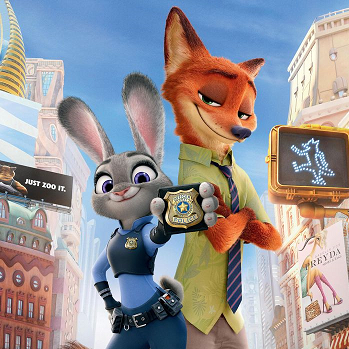 Left: dumb bunny. Right: sly fox. They Fight Crime!
Decker: I've been calling you for three weeks. Why are you avoiding me?
Lucifer: Well, I do have a business to run, detective. I can't play Good Cop/Handsome Devil Cop all the time!
— Lucifer (2016)
Advertisement:

A Sub Genre of Buddy Cop Show where the two "buddies" are:

The reasons that those two people have to work together vary. For the policewoman, he usually is her only witness and/or her last lead. For the guy, it is whether because it affects his business, to be in the good books of the police, to clear his or a friend's name or just because he likes that. Or maybe he just doesn't have the choice. The male sidekick has a much higher than random chance of having a "posh" English accent, and of having his name or job description as the show's title.

This kind of pairing is mostly used in comedies, playing the opposition between The Comically Serious policewoman and the snarky civilian and their Teeth-Clenched Teamwork. However, you could expect a healthy dose of drama as well with the Backstory of each character who has a Dark and Troubled Past that led her/him in this path, cue them having a better understanding of each other and tightening their bond. They have a Strictly Professional Relationship, which of course brings its fair share of "Will They or Won't They?" since Opposites Attract.

Often overlaps with Savvy Guy, Energetic Girl (when the cop is of the "idealist rookie" kind), Monster and the Maiden (if the flatfoot is a human woman and the snarky guy is something else), Strong Girl, Smart Guy and Straight Woman And Wise Guy. Compare Dating Catwoman if they eventually cross that line.

Gender inversions of this trope are possible, but less common.