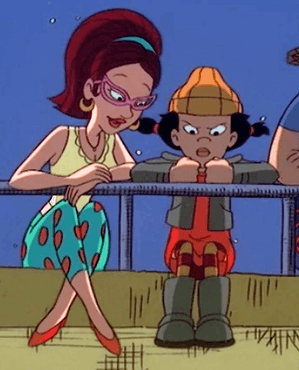 Elinor: Merida, a princess does not place her weapons on the table.
Merida: [moans] Mum! It's just my bow!
—Brave
Advertisement:

This trope is a specific variant of Tomboy and Girly Girl applied to a mother/daughter pair. The mother generally ascribes to the feminine norms of the time (such as a Proper Lady in period works or a Housewife from the 20th century onwards) while the daughter is a Tomboy who generally dislikes more girly things. The mother then disdains her daughter's lack of femininity and may take steps to induce a Girliness Upgrade, often with mixed results. More realistically, she might also worry about her daughter's future, especially in settings that are very strict about gender roles. Meanwhile, the daughter might be tomboyish in part because she is rebelling against her mother's aspirations for her, especially if she has a girly sister or cousin to whom she is often negatively compared. In period works, the Tomboy Princess and Spirited Young Lady may clash with more traditionally feminine older relatives.

This can be played in several ways. The mother might be a very strict Fantasy-Forbidding Mother who repeatedly brings up that she Wanted a Gender-Conforming Child, or an Open-Minded Parent who is accepting of her daughter from the get-go — bonus points if she Used to Be a Tomboy (or at least less girly) but settled into a more feminine role in adulthood. She and her daughter may be distant because of their differences or very close despite them. Similarly, the daughter may stand her ground or experience Tomboy Angst. The important thing is the generational contrast between the two female characters because this trope is often used to show changing gender norms. The mother is usually the embodiment of Acceptable Feminine Goals and Traits, and her treatment of her tomboyish daughter's personality and hobbies is emblematic of the changing times — society is increasingly accepting of women who take up traditionally 'masculine' pursuits, although old-fashioned characters may still be scandalized. For this reason, the daughter is usually the more sympathetic character, or at least the one the audience is expected to root for.

Subtrope of Tomboy and Girly Girl and Like Father, Unlike Son. Compare Jock Dad, Nerd Son for a loose modern gender inversion. See also You Go, Girl! and Stay in the Kitchen for other plots about girls trying traditionally masculine activities. Related to Women Are Delicate — the mother may ascribe to this perception, but the daughter challenges it.