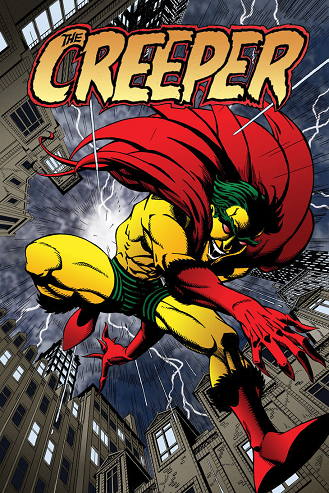 Created by Steve Ditko, the Creeper first appeared in "Showcase" #73 (April, 1968). He went on to star in his own short-lived magazine, suffered a couple of retcons and revisions, and has done some guest appearances, never quite achieving wide popularity.

The original story tells about Jack Ryder, a Gotham City talk host who tries to save a scientist named Dr. Yatz from mobsters. An attempt to sneak in to the boss' mansion in probably one of the weirdest outfits ever, where Dr. Yatz was held during a masquerade, only got Ryder wounded and saved by Dr. Yatz who implanted him with a device that could make his costume disappear and with a serum that gave him super strength and agility, as well as the power to heal almost instantly. It's also mentioned that his laughter makes people nervous or is even physically painful. Ryder could activate the suit (and apparently the superpowers, too, since he mentions not being so fast and strong in his normal form) whenever he wanted with a button-like object.

Depending on the series, Creeper either acts like Ryder or is happily insane. Some versions explain the insanity by stating that he had a drug of some sort in his system at the time he had the device inserted, so the narcotic is recreated along with the costume.

The Creeper is also remarkable in being pretty much the only character The Joker fears (barring an encounter with Frank Castle), which is one hell of an accomplishment.

No relation to the walking green timebombs from Minecraft, or the hunched-over hulk who constantly shouts PAPER from Scooby-Doo, or the monster from Jeepers Creepers.

NOTE: Tropes specific for his version from Batman: The Animated Series go here.