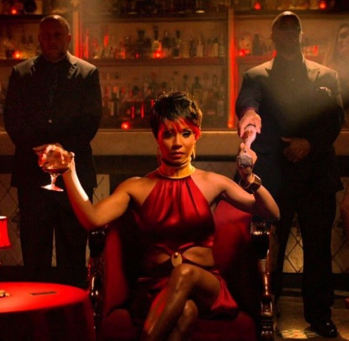 The female version of The Don. Despite organized crime being an expectedly misogynistic world in which traditional gender roles are often mercilessly enforced, some works of fiction are showcasing women as the leaders of crime syndicates in their own right.

Expect her leadership to be challenged by men who believe women should Stay in the Kitchen, which is fairly common due to the violence inherent to this line of work.

Since she isn't supposed to elicit endearment nor pity but fear and deference, a woman in this position is almost always more cunning, violent, demanding and cutthroat than her male counterparts to justify and assert her authority, which is precarious by definition. Likewise, she will often be unapologetically callous towards other women as well, especially towards Housewives and prostitutes who she often sees as weak and pathetic or as competitors if they're younger and/or prettier than her. Also expect her to be called "Ma" or "Mama" when she grows older and/or her children are part of the gang.

Depending on how dark and realistic the show is intended to be, she will either be Friend to All Children in order to show a more humane side of her or she will simply show no mercy towards kids, sometimes not even her own. Usually, this character avoids conspicuous promiscuity since she must always be on her guard and sex puts her in a vulnerable position. Thus, she's either a skilled seductress who only uses sex as a weapon to control whomever she sleeps with or a pragmatic Black Widow who kills her lovers once she doesn't need them anymore. Or a complete asexual in some cases.

May also be a Dragon Lady when the setting involves the Yakuza or Triads and Tongs. She may also be a woman formerly affiliated with the organization before taking over, such as the Lady Macbeth, Dark Mistress, Daddy's Little Villain or Mafia Princess — in those cases, there may be overlap with Never a Self-Made Woman. In thrillers it may overlap with the Sleazy Politician or Corrupt Corporate Executive.

In many ways, this trope is the Evil Counterpart of the Iron Lady, another female authority figure who must show toughness to succeed but whose goals are usually benevolent. Goes hand in hand with Girls Behind Bars, a setting this character almost always experiences at one point or another if she gets convicted, in which case expect her to become the prison Alpha Bitch before long.

Not to be confused with the Gayngster, which is a male homosexual gangster.

This trope is actually Truth in Television but a very sporadic one for the reasons cited above.

The Asari boss of Omega introduces herself in her own unique style.

The Asari boss of Omega introduces herself in her own unique style.