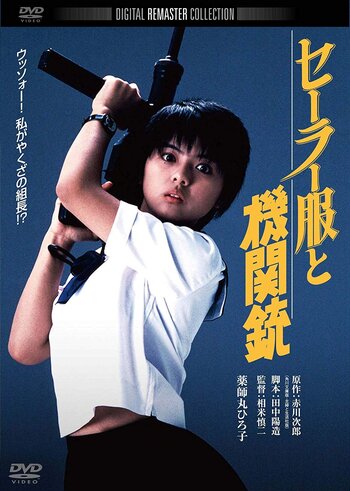 Sailor-fuku to Kikanjū (Sailor Suit and Machine Gun) is a novel from 1978 by Jirō Akagawa, adapted into a film from 1981 by director Shinji Sōmai.

The story begins with a boss of a five-member Yakuza clan called "Medaka-gumi", who is terminally ill, telling the gang members that he's chosen his nephew as the successor. Meanwhile, Ordinary High-School Student Izumi Hoshi returns home from her father's funeral (her father having died in a car crash) to find waiting for her a stranger who introduces herself as Mayumi. She shows Izumi a handwritten note from Izumi's father saying that she (Mayumi) should take care of his daughter in the event that he has died.

The following day, the Medaka-gumi show up at Izumi's school and kidnap her. They reveal that her father was the former boss's nephew, and therefore she's now the successor. Izumi reluctantly accepts, to prevent the others from making a suicidal last stand against a rival gang.

Later, a police detective tells Izumi that her father may have been a smuggler, may have been murdered for the smuggled items, and that "Mayumi" (which isn't her real name) has a criminal record. She returns home to find her apartment ransacked, and Mayumi nowhere to be found, but apparently nothing was stolen.

The gang guesses that the culprit was looking for something hidden there. Sure enough, two other gangs (Matsunoki-gumi and Sandaiji-gumi) soon demand that they give them back some heroin belonging to the Sandaiji-gumi, and the Medaka-gumi have no idea where it might be. A struggle ensues, with other gangs trying to find / steal the heroin, and the Medaka-gumi trying to survive in the face of the threat posed by the other, larger gangs.