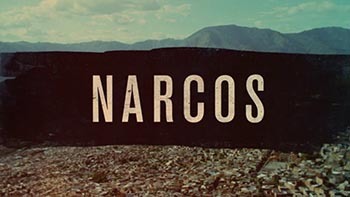 Soy el fuego que arde tu piel, soy el agua que mata tu sed...* "I am the fire that burns your skin, I am the water that kills your thirst''
There's no business like blow business.
—Tagline
Advertisement:

Narcos is a 2015 Netflix Original Criminal Procedural series, produced by Gaumont International Television, chronicling the United States Drug Enforcement Administration's attempts to stem the drug flow from South and Central America into the U.S., related from the perspective of hardbitten deep cover DEA Agents in the 1980s and 1990s. Along the way much chaos, corruption, and bloodshed occurs in the pursuit for fortune and justice. The first season follows the rise of notorious drug kingpin Pablo Escobar and the DEA's attempt to stop him, the second season chronicles Escobar's fall, the third season is the DEA versus the Cali Cartel, and the fourth season goes to Mexico which got a Soft Reboot as Narcos: Mexico. The series is filmed in both Spanish and English, and mixes drama scenes with a semi-documentary style narration and real life news footage.

Features Wagner Moura as the famous drug kingpin Pablo Escobar and Boyd Holbrook and Pedro Pascal as the DEA agents on his trail. Season 4 moves the story to the Mexican drug trade, with Diego Luna as Guadalajara Cartel founder Miguel Ángel Félix Gallardo, and Michael Peña as DEA agent Kiki Camarena. The series also has as its executive producer (and director of the first two episodes) Jose Padilha. Seasons 5 and 6 continue to chronicle Félix's rise and eventual downfall and the inter-cartel Mob Wars that ensued.

CMON published Narcos The Board Game in 2018 which has one player take the role of El Patrón while the other players take role of the factions tring to hunt him down.

A Turn-Based Tactics game developed by Kuju and published by Curve Games called Narcos Rise Of The Cartels was released November, 2019.

IDW published a Narcos comicbook series from December, 2019 to July, 2020.

Interestingly, Narcos marks one of the few Netflix original shows to air on other platforms: Gaumont allowed Univision to televise it, and Pluto TV to provide an ad-supported means of streaming it for free.

open/close all folders
#-F
At the Airport:
Customs Agent: My boss is not having a good day. I think his wife left him.
The following episode, when the agent an his boss are both being interrogated by the DEA for their role in reporting Murphy to the cartel:
Boss: If I open my mouth, they kill me... and they kill my wife.
Customs Agent: [sympathetically] He's having problems with his wife.
G-L
M-R
S-Y