Damn, It Feels Good to Be a Gangster! 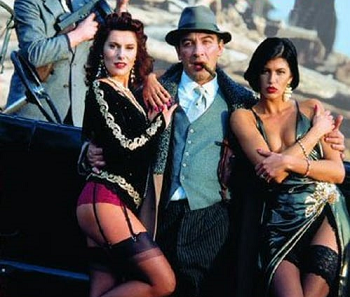 The warm life of Al Capone, indeed.
"As far back as I can remember, I always wanted to be a gangster."
— Henry Hill, GoodFellas
Advertisement:

Criminals are cool. It might be a terrible thing to say, but it's true (at least, in fiction). One of the most enduring images in modern fiction is that of the glamorous gangster — a streetwise, Self-Made Man who's rich, powerful, badass, irresistible to women, fashionable, and unfettered by conventional morality. In short, a perfect Escapist Character for times when being a good guy is just too dull.

Violence might be abhorrent in Real Life, but on the big screen it can be just another way to get the audience's adrenaline flowing, and there's nothing wrong with that. Besides, in fiction, it doesn't matter how many dogs you kick as long as you look really cool when you do it.

The critic Robert Warshow wrote a famous essay called The Gangster as Tragic Hero, in which he posited that gangsters like those in Scarface are Americanized versions of Greek or Shakespearian tragic heroes, dark mirrors of The American Dream, or the "great no" to the American promise of success. He argued that they were a counter to the films made in The Golden Age of Hollywood, and were a form of Wish-Fulfillment for working-class audiences with their Rags to Riches stories and charismatic, tragic characters. Even when Executive Meddling had the bad guys getting punished, the filmmakers and actors conspired to give the villain protagonists a memorable death scene that made audiences Cry for the Devil, similar to classic tragic heroes and villains. This essay made a big impact on the likes of Francis Ford Coppola and Martin Scorsese and informed their Genre Deconstruction in The Godfather and Goodfellas; in the case of The Godfather it was essentially an Unbuilt Trope.

This trope was widely popularized in the US during The Roaring '20s when Prohibition made organized crime big business and the gangster became one of the iconic figures of the era; and The Great Depression, where bank robbers were seen as striking at the greedy and foolish banks that got the country into this mess. Of course, it has roots much further back in history — the popularity of outlaws like Jesse James and Billy the Kid in the American frontier era certainly counts, and even as far back as Robin Hood it was cool to steal. However, modern works are more likely to subvert or deconstruct this trope than play it straight. Indeed, the "rise and fall" narrative has become such an integral part of the gangster genre that it now makes straight examples of this trope nigh impossible.

This trope is also a huge part of Hip-Hop culture, as shown by the name of the Gangsta Rap genre. Many rappers play this trope straight, writing Boastful Raps about all the money they make from pimping, drug dealing, and robbery, while music videos show them driving luxury cars and wearing loads of jewelry while surrounded by strippers in their mansion (all implied to have been purchased with money earned through the aforementioned illicit means). However, other rappers are just as likely to deconstruct this by showing the downsides of being a gangsta: sure, you're badass, if you don't mind dealing with prison, drug addiction, friends dying young, your own life being in jeopardy, siring children out of wedlock...

In Mexico, there's also the narcocorridos (drug ballads), songs glorifying and glamorizing the culture of Mexico's drug cartels, many of them commissioned by the drug lords themselves to boast about their exploits.

When the cool criminal is the lead character, they're probably a Villain Protagonist or Anti-Hero. Their PR may be helped by only doing crimes against a Asshole Victims, as in a Karmic Thief or Sympathetic Murderer.

Sub-Trope of Evil Is Cool and closely related to Do Not Do This Cool Thing. A direct opposite of Being Evil Sucks. See also Neighborhood-Friendly Gangsters and Draco in Leather Pants. If the criminals aren't ever shown actually doing anything, well, criminal, they're The Pirates Who Don't Do Anything. Criminals who believe in this point of view may opt to be Just a Gangster and turn down chances to leave their criminal life behind.

Big Boy Back in Business

With Dick Tracy in jail, Big Boy's gang is running the city!

Big Boy Back in Business

With Dick Tracy in jail, Big Boy's gang is running the city!