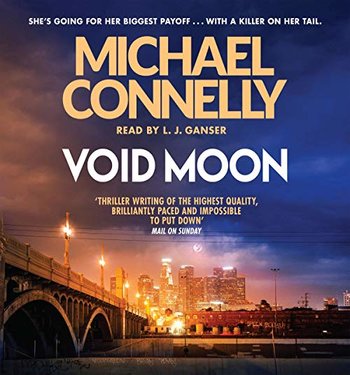 Void Moon is a 2000 crime novel written by Michael Connelly.

Cassie Black is a former professional thief specializing in stealing from Las Vegas gamblers. In the back story, a job at the Cleopatra casino in Vegas led to her lover Max being killed and Cassie herself getting arrested and serving five years in prison. Now Cassie has gone straight and is selling luxury cars at a dealership in Los Angeles. The reason she is in Los Angeles is to watch over the child she had with Max—she was pregnant at the time of the fatal robbery. Cassie was forced to put her daughter Jodie up for adoption after giving birth in prison.

Cassie is already dissatisfied with the boring straight life, but she is motivated to take action when she finds out that Jodie's adoptive parents are moving to Paris. She calls up Max's brother Leo, a career criminal, and asks for work. In short order Leo comes up with a job: another robbery in the Cleopatra. A high roller is going to be visiting, and Leo's contacts tell him that the high roller will have $500,000 in his suitcase. Cassie uses her cat burglar skills to gain entrance into the mark's room and finds the suitcase, but the mark starts to wake up...

...cut to a few hours later and casino security investigator Jack Karch. Karch is called by Cleopatra owner Vincent Grimaldi, who has discovered the mark dead in his room. The mark wasn't a high roller, he was a Mafia bagman, and the suitcase contained $2.5 million, not $500,000. Karch, who also works as a hit man, is hired by Grimaldi to find and retrieve the missing money. Karch then sets off after the mysterious thief, murdering as he goes.