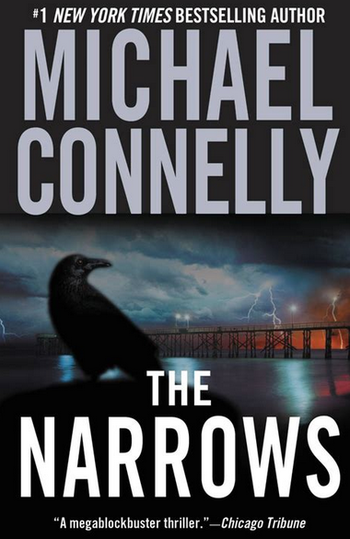 The Narrows is a 2004 mystery novel by Michael Connelly.
Advertisement:

It is a sequel to previous Connelly novel The Poet. Serial killer The Poet, whose death was suspected but not confirmed, turns out to be still alive, and active. And what's more, the Poet has sent a message to FBI agent Rachel Walling, who tried but failed to catch him. Now the Poet is back and has ensnared Walling in a new game of cat-and-mouse.

Meanwhile, former LAPD detective Harry Bosch (Connelly's most frequent protagonist), now a PI, is investigating the death of his old friend and former FBI agent Terry McCaleb. McCaleb, a heart transplant recipient (and the protagonist of Connelly novels Blood Work and A Darkness More Than Night), died when his body rejected the donor heart. The authorities have written it off as natural causes, but his widow suspects foul play. Bosch starts to suspect foul play as well when his investigation reveals that McCaleb had a stalker—who turns out to be the Poet.